More and more companies are introducing the automation of human activities with the mouse and keyboard.

RPA and RDA solutions allow you to automate repetitive operations/tasks and business processes. The use of these modern and innovative methods allows relieving the workload of employees with software robots. Complex operations and processes previously carried out manually by employees often cause monotony and are subject to a high risk of errors. Thanks to AUTOMADE Robots, these operations can be performed faster and with greater accuracy. Robotic applications work with the total or partial exclusion of humans.

The use of robots in the organization optimizes costs of process handling, scales the benefits resulting from their implementation (easy ordering of work to a robot and easy availability of its results) and increases employee satisfaction, allowing them to improve in more complex competencies.

RDA-type software is designed to automate operations performed on a single workstation. The robot automates actions previously performed manually by a human using a mouse and keyboard. The launch of the robot is initiated by the workstation user. The software imitates the user’s actions in IT systems, performs calculations, initiates and performs tasks according to a defined (recorded) Macro – algorithm. The robot operates in supervised mode (Attended RPA).

RPA-type software allows processes to be automated by handing over to software robots the execution of operations that were previously carried out by people. A robotic application copies the human click-movements in various types of computer programs. The robot performs quickly and flawlessly recorded work scenarios, the so-called Macros. The programs are installed on servers and no human supervision (Unattended RPA) is required during operation. Launching takes place according to a defined schedule or based on defined triggers. 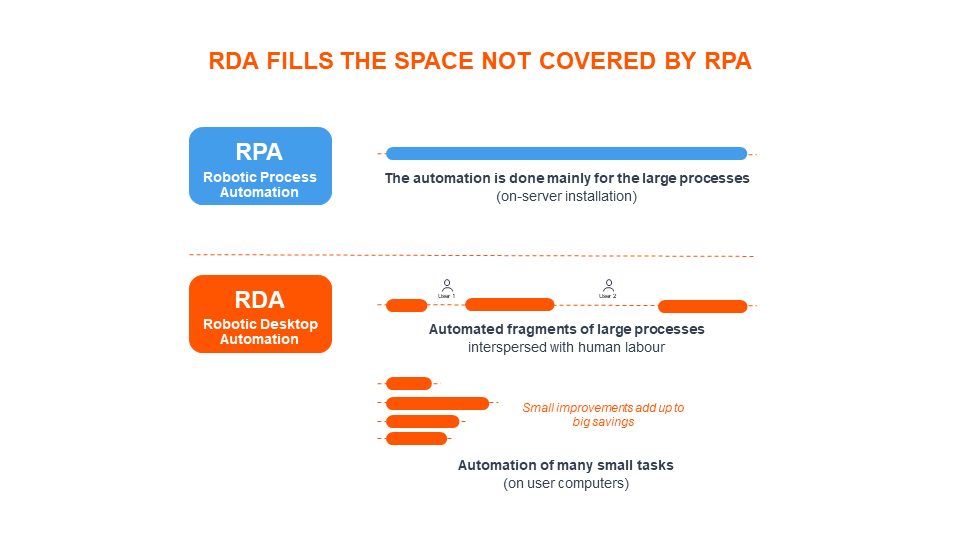 Office processes worth of robotizing

Robotisation of tasks brings the most benefits where we have repetitive, standardized tasks – with an identified execution procedure, but at the same time with a high degree of complexity and, consequently, high labour intensity. Tasks that occur periodically are also suitable for automation and need to be completed in a short time and with great precision. Robotisation of tasks that are susceptible to human error or manipulation is also of great value. The handing over of tasks to software robots is also reasonable in the case of operations on confidential data, where the machines should carry out tasks instead of humans. Another type of task that is worth passing on to the AUTOMADE Robots is multi-system operations, requiring switching between multiple interfaces and aggregating large digital data from multiple sources.

Check what processes are worth automating with RDA/RPA solution?